Johnnie Walker is a Scottish whisky that originated in the burgh of Kilmarnock in East Ayrshire. John Walker established the brand in 1825 when he worked as a grocer on High Street.

In 1860, the Spirits Act allowed the blending of grain whiskies with malt whiskies, which began the era of blended Scotch whisky. It was John Walker’s son and grandson who developed Johnnie Walker as a brand into the powerhouse it is now.

Johnnie Walker is now owned by Diageo, a multinational company. Whisky has since become the go-to drink for many people worldwide.

Two prominent labels in the Johnnie Walker brand are Johnnie Walker Black and Johnnie walker double black. While from the same brand, and with similar names, these two drinks are each unique in their own right.

Johnnie Walker Black carries a 12-year age statement. This label was launched in 1909 and has since been among the top-selling whisky in the world. The Black Label is a blend of around 40 whiskies from across Scotland, from Speyside sweet whiskies to Highland malts.

In comparison, Johnnie Walker Double Black does not carry an age statement and was launched as recently in 2011 worldwide. The master blender of Diageo, Jim Beveridge, wanted to create a whiskey that took the flavors of Johnnie Walker to a deeper level. This whisky uses higher levels of Scottish West Coast and Island whiskies to create a new intensity to the Black Label flavor. 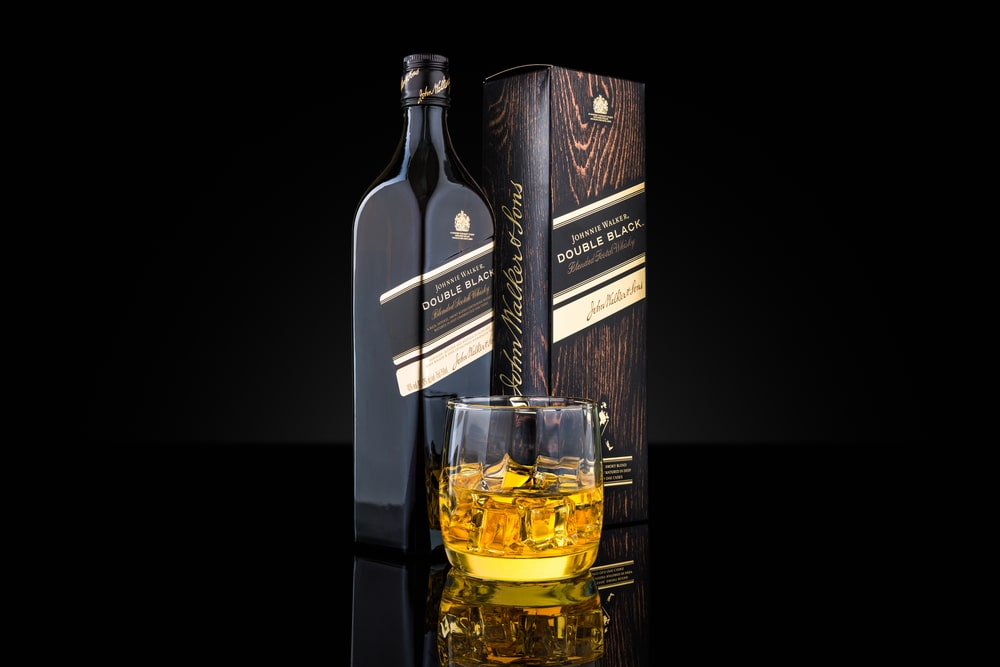 Given that the two labels originate from the same brand, some may argue that there cannot be too many differences between them. However, Johnnie Walker Black vs Double Black has been a common comparison among the whiskey community, and for good reason.

These two labels are each unique and iconic and can be appreciated by different people worldwide.

Johnnie Walker whiskies are produced similarly, however, the distinction between the blends comes from the types of whiskies used in the production of the beverage.

The whisky-making process begins with cereals which are converted into soluble sugars via germination. This process, known as malting, is done by combining hot water with the cereals, allowing the cereals to grow.

The cereals are dried and ground in a mill, after which they are mixed with hot water to create a mixture similar to beer. The beer is distilled twice to decrease the water content and increase the alcohol concentration.

This final result is transferred to specially treated oak casks where the mixture matures for at least 3 years to produce Scotch Whisky.

Johnnie Walker Double Black is matured in heavily charred casks made from oak and contains higher proportions of whiskies from the Scottish West Coast and Island whiskies. The whiskies used to produce this blend are younger compared to the Black Label.

The charred oak barrels are used to further age the blend, resulting in the smooth and smokey flavor enjoyed worldwide.

Johnnie Walker Black is produced by a team of 12 blenders who combine 40 whiskies to create the Black label. The whiskey is matured in ex-bourbon barrels, with most of its flavor coming from the Islay region whiskies, with subtle notes emerging from the Speyside and Highland contributions.

The whiskey is matured for a minimum of 12 years within these barrels. 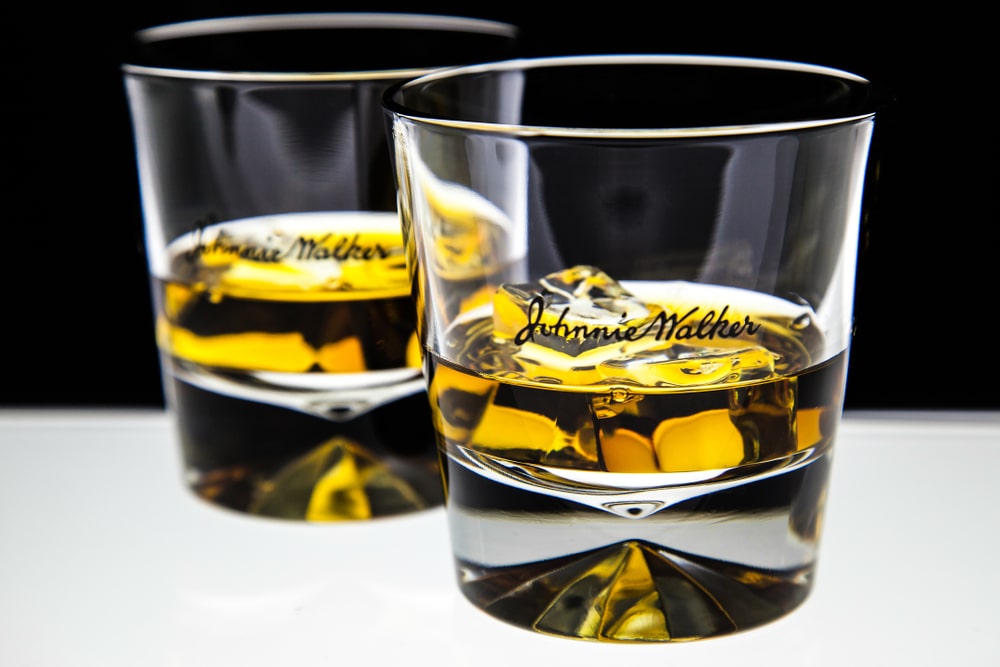 Johnnie Walker Black vs Double Black has the same alcohol strength of 40% ABV (80 proof in the US). Given that the Double Black is made using more exaggerated proportions of the Black blend, these two whiskies are rather similar in their makeup.

The differences come primarily through the aging process and the form of the barrels used to mature the blends. Black Label expresses more notes between sweet and oaky finishes, whereas Double Black has heavier notes of spice, sweet, and smoke.

As these whiskies are produced using the same initial blend, they both have an ABV (alcohol by volume) of 40%. The higher price of Double Black comes primarily from the addition of the younger Islay whiskies that are added to the original Black Label blend.

Double Black is described as a more mature whisky, primarily from the stronger and bolder notes of smoke and barrel char as opposed to the lighter floral notes of the Black Label blend.

Double Black is sold in a translucent black bottle, while Black Label is sold in a clear bottle. To see and compare the true color of the two whiskies, you would need to pour them into clear glasses to see a true side-by-side comparison.

How To Drink Johnnie Walker Black vs Double Black

Johnnie Walker Black Label has been described as a drink for easy drinking, with most consumers enjoying it neat or with a touch of water.

Black Label can also be used as a base for cocktails.

The Perfect Manhattan, as stated by VinePair, can be enjoyed and made using Johnnie Walker Black.

Combine 1.5 ounces of Black Label, ½ an ounce of sweet vermouth, ½ ounce of dry vermouth, and 2 dashes of bitters into a mixing glass. Add ice to the mixture and stir, after which strain into a coupe glass.

To finish off this cocktail, garnish it with an orange twist.

Double Black is not as suitable for cocktails and should rather be enjoyed neat or with a few drops of water. The water helps open the whisky flavor more and brings out the deeper notes of the beverage. These notes and the flavor of the whisky are primarily nutty and smoky, with a sweet taste to round it off.

To best enjoy this whisky, pour 2 ounces for a neat pour, or 3 ounces for a double. Add several drops of water, tap water works fine, and enjoy in a whisky glass for the full experience.

While pricier than Black Label at $45 per bottle, this whisky has an initial flavor of a mixture of bourbon and sherry cask notes and finishes strong with hints of smoke.

Similar to Highland Park, Connemara is a peated single malt whisky which is a good alternative to the peated elements of Black Label. The finish of this whisky is golden honey with notes of deep peat. The average price per bottle is $41 pre-tax.

An alternative to Double Black is the Ardbeg 10 years. It is an Islay whisky with similar flavors to Double Black. It has smoky, salty, buttery, and fruity notes with a warm finish. For $58, this is a smooth whisky with a classic look.

Octomore 10 Series is a whiskey made from the Islay distillery Bruichladdich. It is known for being the most heavily peated whisky in the world and has strong smoky flavors which makes it a popular choice.

This is a luxury alternative to Double Black at $248. However, the price reflects the extensive work that goes into producing this whisky, ideal for mature whisky drinkers.

A bottle of Blue Label will set you back around $180 so appreciate every sip.

Johnnie Walker Black Label was created in 1909, giving it almost 102 years longer in the market than the Double Black Label.

The formula for Black Label has been refined since its creation and is now one of the most notable brands on the market.

Black Label is notable for being easy to drink and smooth and is slightly spicier than the Double Black Label. Double Black, however, is bolder and more vibrant. It has been described as the ‘more grown-up version’ of its predecessor.

The Black Label blend is among the most popular blended whiskies in the world, due to its long time since establishment and its unique blend of Scottish whiskies. 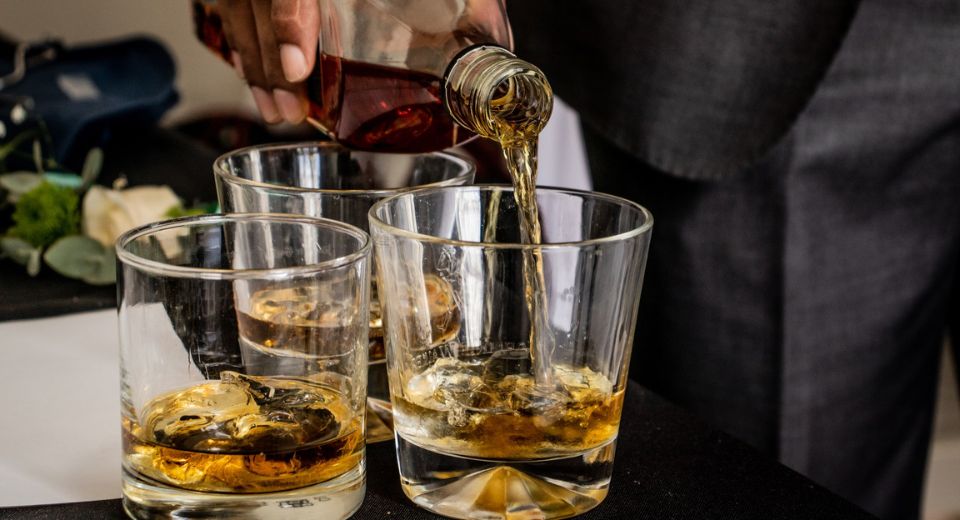