Convenient. Quick. Small. The Keurig is popular for many reasons, slotting alongside the classic home coffee pot as the de facto coffeemaker of the American home. Below we’ll take a look at the appeal of the Keurig and the difference between the Keurig K50 vs K55.

That’s not to say all Keurigs are alike. Just like any other large brand, the Keurig company is constantly releasing new versions to fine-tune their model. I’ve used Keurigs a few times in the past, from my mother’s little red machine to my roommate’s large silver beast. Which one should you add to your coffee set-up?

What Is The Biggest Difference Between The Keurig K50 Vs K55?

This question tends to trip up new Keurig buyers, while previous customers will be a little savvier.

Let’s start off with the similarities, of which there are much more than differences. Both the K50 and the K55 are under what’s known as the K-Classic model. It’s used not just for coffee, but for tea, hot chocolate, and even cider.

The K50 is the one I used before I got a new apartment, which I loved for its tiny size and how quickly the coffee brewed. With just the press of a button and some freshwater, you’ll have good coffee ready to go in a matter of minutes.

Now for the differences between the Keurig K50 vs K55. While both of these models carry the same water volume and boast a removable tray, the K50 is generally a little cheaper. The K50 can range from $80 to $100, while the K55 can reach up to $120.

The K55 also has a charcoal water filter, which could be a dealbreaker depending on how sensitive your tastebuds are. Keep in mind these price differences also depend on whether or not you purchase a refurbished model, which is a used Keurig that’s been cleaned up and tested for a competitive price.

Which Keurig Model Is Best For Me?

Due to the similar size, tiny apartments with less foot traffic (think living alone or with one other person) should be fine with either the K50 or the K55.

They’re both incredibly similar, matching several features such as having programmable settings, a large water volume, and flexibility in making multiple drinks.

With the major difference of slight aesthetic changes and the charcoal water filter of the K55, It really just boils down to your budget and what you hope will stick around over the next few years.

Those who want a snug office addition should consider the K-Mini Plus to save on space. If you want to replicate the feel of a cafe in your kitchen, the Keurig K-Cafe has everything you need.

How Popular Is The Keurig?

It’s a good time to be a business in the beverage brewing industry.

The global coffee industry has hit some truly stunning figures as of late, adding up to a staggering $225 billion in revenue for the American economy alone. That’s nothing to say of the boom in home brewing and all the accessories that come with it.

The Keurig is a coffeemaker I’ve used several times in the past, with the average household I’ve visited often having a model tucked beneath a kitchen cupboard. I eventually swapped it out for a pourover, French Press, and Moka pot to get a little more variety out of my coffee. That said, variety can still be gained with a strong Keurig set-up.

Today the Keurig is often neck-and-neck with the popular Mr. Coffee in sheer presence. Other competitors have since risen to challenge Keurig’s undisputed grip on the convenient coffee space in the form of Nespresso coffee capsules and the Instant Pod.

If you don’t want to go through the financial trouble of shuffling through different brands, Keurig is known for being reliable, sturdy, and compatible with many lifestyles. The most digging you’ll have to do is between each variation, such as the Keurig K50 vs K55.

What Is The Keurig? 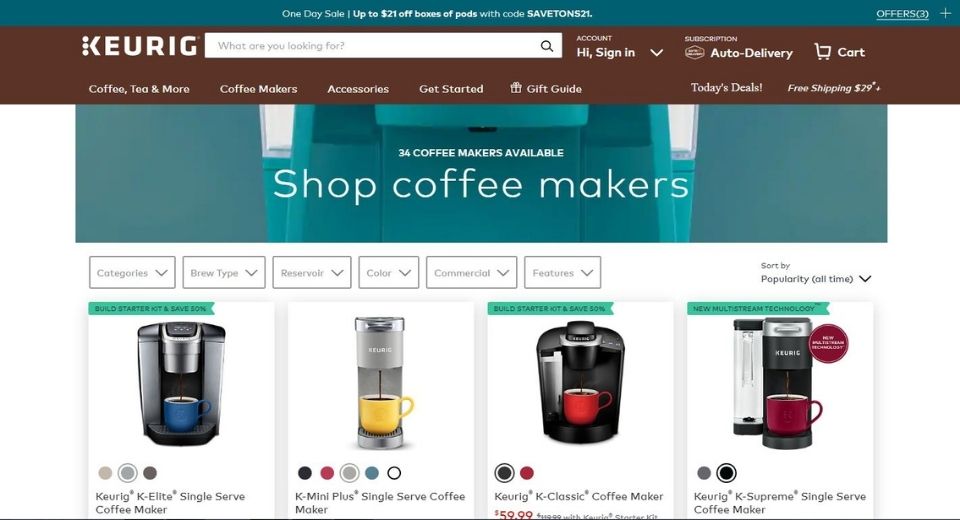 An uncommon question, but one you may still find yourself asking. Just what makes the Keurig different from your average coffee pot or pourover?

Superficially, the coffee the pourover, the coffee pot and Keurig produce is similar. They both use the same grind and, subsequently, create similar texture and flavors. The most significant difference is the K-Cup: the convenient little cup of pre-ground coffee you slot into the machine.

If you decide to go through with a Keurig, expect a thin, smooth mouthfeel, bright flavors, and just a touch of froth. I found myself preferring Green Mountain K-Cups for their stronger flavor notes, though Peet’s Coffee is a solid second choice.

Nothing is set in stone during your coffee journey. If you’ve considered buying specialty coffee bags to support today’s struggling roasteries, consider purchasing a grinder with your Keurig.

The reusable K-Cup can be filled with the grounds of your choice and rinsed with a little warm water. The Keurig itself is a long-lasting creation that can sit comfortably in your kitchen for years before showing its age (provided you don’t get a defective model, that is).

We’ll explore that a little more on K-Cup sustainability below, but trust there’s a coffee brewing method with your name on it. Before you know it, it’ll be slotted into your daily routine and you won’t be able to imagine life without it.

Eco-friendly disposability habits are a major concern for many coffee drinkers. While the Keurig is much beloved for its convenience and long-lasting models, it can pose a problem for the green-minded.

Green values are promoted everywhere in the coffee industry. Just look at your average specialty coffee bag and you’ll likely see a line or two stressing the bag’s paper recyclability.

Maybe a promise to donate a certain amount of proceeds to an environmental non-profit. Keurig has come under fire for alleged difficulties in recycling their K-Cups.

While it’s common knowledge that paper, glass, and plastic can be reused and repurposed without a drop in quality, some products are a little too complex to be easily broken down.

Contamination from other ingredients can affect the viability of a recycled product, leading it to be dumped with the rest of the trash. Fortunately, the reusable K-Cup solves this problem nicely.

Not only do you not need to worry about clogging up today’s landfills (responsible for at least 15% of methane gas emissions in the United States), you can fill them with any kind of coffee you want.

Skip the bags filled with used K-Cups and go for an option that’s cleaner and more flexible. Just make sure you stick to a medium-fine grind so you can pull a similar quality to the standard K-Cup model!

What Are The Different Keurig Versions?

Keurig places personal details above all else. The company has periodically released new versions, as well as updated older versions, to keep up with the demand for customization.

The first thing to keep in mind is the basic models. The Keurig has the single-serve coffeemaker, designed for one cup at a time, and the hybrid single-serve and drip coffee model. The latter is perfect for larger households that need several cups of coffee going at a time.

These come in a variety of colors, from ruby red to matte black, though the size is contingent on the volume of coffee you need. If you don’t have a lot of space or move around often, it’s best to stick to the single-serve.

You don’t even have to stick to conventional drip coffee. The Keurig K-Cafe is designed to replicate the coffee shop in the comfort of your home, boasting a milk frother to help you craft high-quality lattes and cappuccinos.

The Keurig can get even more ergonomic, such as the K155 or the K-Mini Plus for your studio or office space. With so many options at your fingertips, it’s understandable to get a little choice fatigue.

Learning about the Keurig K50 vs K55 will help you whittle down your decision just a little more so you can finally start enjoying hot, fresh coffee anytime.

What Should I Buy With My Keurig?

Once you figure out your preferences concerning Keurig K50 vs K55, you’ll want to supplement your purchase with a few extra goodies. Don’t worry: these won’t break the bank!

If you want to buy reusable K-Cups, make sure to get a grinder with it. You can either order your coffee pre-ground from a roastery or give it a try at home with a burr grinder, designed to offer several grind levels to match your brewing method.

If you don’t want to take the plunge with the Keurig K-Cafe, you can also buy a manual milk frother. These are usually battery-powered and can whip up your milk to a perfect froth. Whichever you decide to go with, American coffee roasters I highly recommend you try out are Counter Culture Coffee, Deadstock Coffee, and La Colombe.

How Do I Make Sure My Keurig Lasts A Long Time?

Everyone wants their dollar to stretch as far as possible.

Since it was designed with convenience first, taking good care of your Keurig isn’t all that hard. Some long-term care tips are obvious, such as not dropping your Keurig or putting it anywhere plastic parts could melt (such as too close to the stove).

If you’re concerned about having to replace any parts, sign up for a warranty. The Keurig K50 and the Keurig K55 both offer three-year and four-year protection plans to replace damaged parts for free and gift card exchanges should you want a new purchase entirely.

The Keurig is a staple for a reason.

It offers unparalleled convenience in every part of the coffeemaking process, from the simple K-Cups to the several year warranties. Even the unreliable sustainability of the K-Cup design can be mitigated with a reusable model. No matter where you land on the coffee scale, there’s something to love here.